Located in the small village of Buggenhout, the Bosteels family has run the brewery for over 200 years, seven generations.  With this history, styles are created.

Look at DEUS, a true champagne style beer.  Brewed in Belgium with barley were it isfermented the first time. Then the brew travels to France where it is bottled into champagne style bottles and riddled for up to a year in the classic champenoise technique.  After the daily quarter turn, the neck of the bottle were all the yeast has been turned to, is frozen and dégorgement of the yeast bung  is removed, followed by a cork and cage.  Then it makes its voyage back to Belgium to be sold and distributed.  By know means the easiest of beers to be made.

The glassware in Belgium is not just for show or for the beer geek that has every glass for all the beers he/she enjoys.  In the days before us, when mail coaches traveled the Flanders countryside, the coachmen could not leave there carriages for a pint.  The Kwak glass was originally created to allow them a beer while they stayed with the horse drawn carriage.  The glass holder allows the glass to rock, hence changing the center of gravity and stopping slippage and to always have a drinking vessel with them.

Tripel Karmelit uses three different grains in their grist: Barley, Oats and Wheat.  Thecombination of these grains and the percentages of each to the beer, add a unique profile that redefines a style like a Tripel.  Originally created over 300 years ago from the Carmelite monastaery, this beer brings enjoyment to any palate.  With its soft flavors of honey, vanilla, pear all balanced out with hop bitterness leaving herbal and citrus notes on ones tongue.  The huge head fills the tulip glass with Belgian lace, showing the definition between that and the light amber brew beneath it. 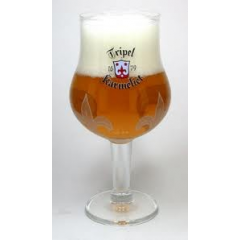 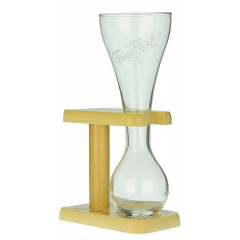 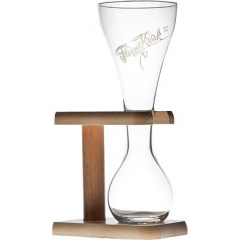